On my recent visit to the Library of Congress, the tour guide showed us the Giant Bible of Mainz – one of the last bibles to be totally transcribed by hand (1452-3). This effort took 15 months of solid work by a single scribe. And what an amazing piece of work – every letter meticulously created with a feather pen, each perfectly aligned on the paper. This bible marked the end of an era – when knowledge was available to only a select few. 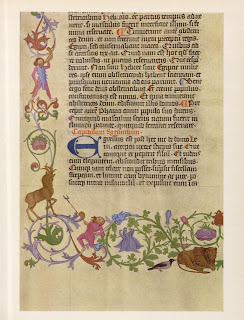 On the other side of the room was the Gutenberg Bible – the first book printed using moveable type on the Gutenberg Press during approximately the same time period. This bible too was impressive, even if it was printed on a machine. And it marked the beginning of a new era, one where knowledge was available to many, rather than just a select few.

But ink fades and paper deteriorates. Both of these Bibles had to be in specially controlled cases for both light and temperature.

That night I went back to my son’s house and watched the news. The lead story was how Borders Bookstore was going out of business nationwide. Many newspapers had already suffered the same fate, but now a major national bookseller was unable to keep its doors open. The digital era of the Internet and ebooks had forced it to shut down. Like hand written books 600 years before, this passing of an era was in many ways sad. Yet at the same time, the new digital age marks a significant time in human history – where knowledge can now be both consumed and produced by anyone at anytime and any place.

We no longer need the skills of a scribe, nor do we require paper printing to transmit information. But the need for quality information is greater than ever. As a business owner, it is your responsibility to not become a victim of the Internet, but to change, adapt, and master it. You have the ability to not just copy what others have written about the products and services you sell, but to develop your own unique content that others will find useful.