How To Be More Creative (and Prolific) 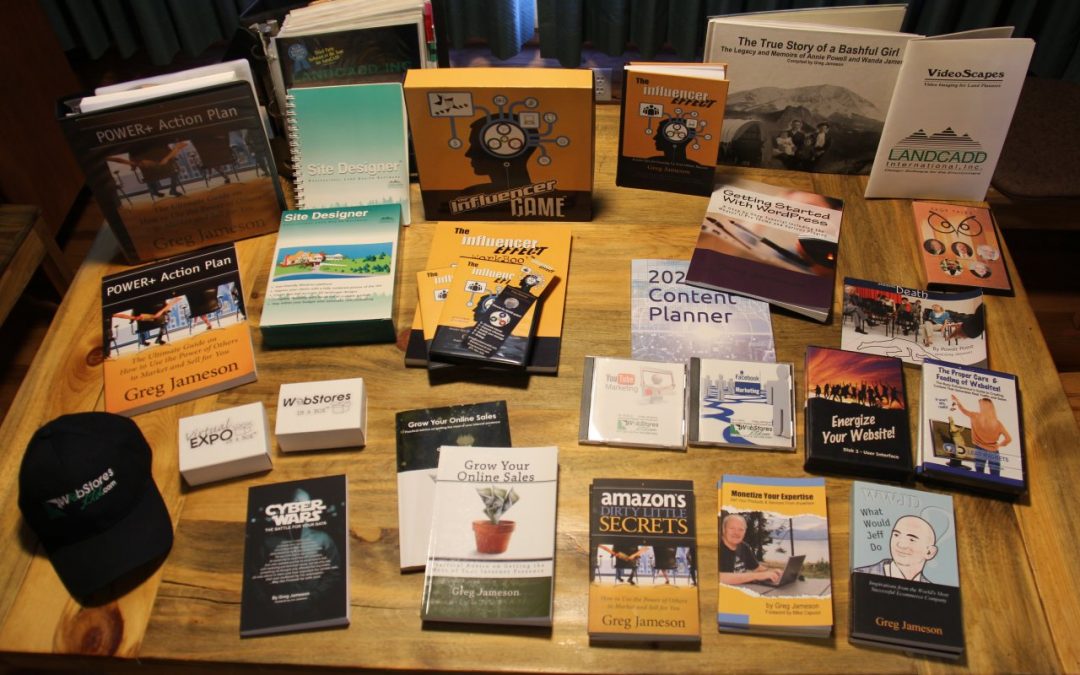 Being creative and being prolific go hand in hand. I am frequently perceived as being being both, and thus get asked about “what’s my secret?” the truth is, anyone can be both more creative and more prolific. these are skills, and skills can be learned.

Now as a business owner, you might be wondering why you should care. After all, you can hire creatives. And while that is true, being consistently creative and coming up with new business ideas, and then acting on them and implementing those ideas to bring them to market, is a key success factor in any business.

The featured image for this article shows some of the products I’ve created. There are some books that are missing, and some early software, as well as strictly digital creations such as the hundreds and hundreds of blog articles, podcast interviews, videos, websites, and all the various print-on-demand products I’ve created (I put a hat in the picture to remind myself about those). The picture does show my Influencer Effect Game, my latest book (Cyber Wars: The Battle for Your Data), and my two products that I am in the process of releasing: WebStores In A Box and Virtual Expo In A Box. And of course there is more to come, as I’m planning on releasing at 2 more books this year.

Even though it looks like I am a super-creative person that is super prolific, I pale in comparison to some of the people I look up to. Take for example:

How do they do this? Here is what I have learned in my creative journey. When I was in high school, I read a book by Edward de Bono called Lateral Thinking. Anyone who wants to be more creative should read this book. Lateral thinking—a term first coined by Edward de Bono in 1967—refers to a person’s capacity to address problems by imagining solutions that cannot be arrived at via deductive or logical means. Or, to put it in simpler terms: the ability to develop original answers to difficult questions.This is the essence of creativity, and arguably the most valuable skill a business person can possess.

Here is how it works – you start by picking a transitional object. A transitional object is someone or something embodying certain characteristics or qualities that you can use as inspiration for new ideas. They can be someone or something you like and admire, or the opposite. It doesn’t really matter. My book, What Would Jeff Do?, referring to Jeff Bezos, is an example. Bezos believes strongly that the customer is the most important asset a company has. How can you apply that to your business What if you challenged that assumption and decided that someone else, perhaps the delivery person, was the most important?

Next, try jumping to the wrong answer. Rather than doing the same thing as everyone else, try something different. If your competitors are all holding Black Friday sales, what if you closed your store on that day, giving your employees a day off (REI did just that and the word of mouth marketing it got was huge!). Don’t add – subtract. Most strategies are additive, but what if you took something away and stopped doing something that everyone else is doing. How can you leverage this to your advantage?

As you can see, de Bono suggests that you think differently. I have found 3 specific tactics that help me do this:

1. Generate a lot of ideas.

Most of the ideas you come up with will suck. That’s Okay, the goal is to come up with lots of them. If you are looking to wrap a gift for example, ask yourself, “What are 100 ways I can wrap a present?” Write down all of your answers. Don’t be afraid to copy others – the creative process is about adding your own personal experiences, not coming up with ideas in a vacuum.

Come up with two or more disparate things and figure out how to tie them together.  For example, fruit salad and shoes. What can you create by combining these two objects? Perhaps shoes that smell like fruit?

3. Observe and write down things as you see or think of them

Keep a record of things that you observe. Have a paper and pencil ready as you watch TV, listen to podcasts, and by your bed. Some of your best ideas will come to you when you relax and aren’t trying to think of things, such as when you go on a walk or take a shower. Capture those moments so you don’t forget them.

Yes, but how to I actually create something now that I have all these ideas?

What I have discovered is that you must budget your time to develop any new product. It won’t create itself. Start with a prototype. In the case of a book, write a quick synopsis, typically only one or two pages, describing what the book is going to be about. Next, Write an outline or the table of contents. Once you have an outline, you can just fill in the blanks. You will find that if you do this, a book will often “write itself.” The same is true with software, games, print on demand merchandise and just about anything else you might want to create.

As my friend and colleage, Chris Brogan says, “Every day you don’t execute is a day you don’t get the opportunity to sell. It’s another day you won’t learn what really isn’t working. It’s a day where you’re still a wannabe and not a doer. Waiting until you get the confidence is like waiting until you’re ready to have kids. Just launch. Confidence isn’t something you get from NOT doing things. It comes from knowing you launched.”